How Argentina Can Go to World Cup Final: La Albiceleste finished at the top of the group, qualified for the round of 16, and envisioned an encouraging outlook in the draw.

How Argentina Can Go to World Cup Final 2022?

Argentina, one of the main candidates for the title in the World Cup in Qatar 2022, did not start its journey in the most important soccer event of all in the best way. It is that, to the surprise of locals and strangers, the Albiceleste fell 2-1 against Saudi Arabia, one of the most humble and modest teams in the competition. Then, in their second appearance, now with no margin for error, those strategically led by Lionel Scaloni beat Mexico 2-0 and took a deep breath. The annotations achieved by Lionel Messi and Enzo Fernández gave the two-time world champions a lot of air in the face of the resolution of Group C of Qatar 2022.

Finally, more precisely, this Wednesday, Argentina met Poland face to face with two objectives: to qualify for the round of 16 and to do so in first place in the group. The result? Mission accomplished: 2-0 victory thanks to goals from Alexis Mac Allister and Julián Álvarez to unleash the madness.

In this way, Argentina not only qualified for the round of 16 of the World Cup in Qatar 2022 but, at the same time, they did so at the top of Group C. Thanks to this, the champions of the Copa América in 2021 envision A truly encouraging outlook for the draw towards the great goal of going to the grand final.

The Argentine in Round of 16

In the first instance, the confirmed confrontation: next Saturday, December 3, Argentina will have to measure forces with Australia with the Ahmad bin Ali Stadium in the city of Ar-Rayyan as the stage. Without any doubt, one of the most accessible crossings that could be played by the Albiceleste, who was able to avoid the clash with France.

Subsequently, suppose Argentina qualifies for the Qatar 2022 World Cup quarterfinals. In that case, they will have to appear on Friday, December 9, at the Lusail Stadium, where they have already played against Saudi Arabia and Mexico. On that occasion, Scaloni’s men should meet the winner of the series between the Netherlands and the United States. 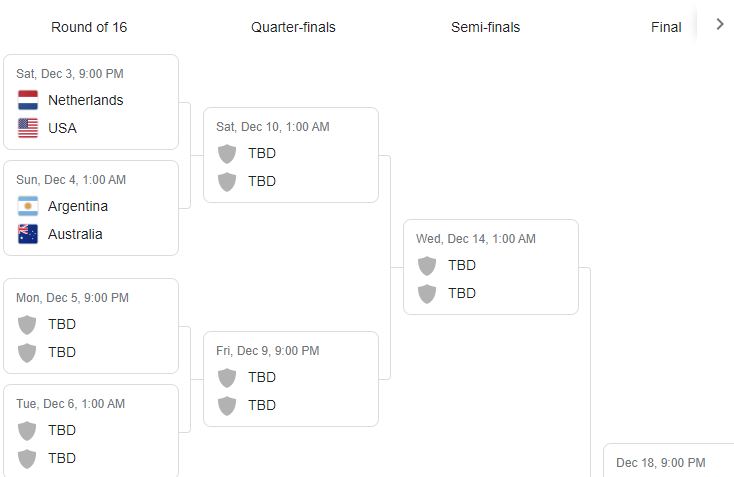 And if Argentina advances to the semifinals? Well, only then could he have a very careful opponent. For that instance, the two most senior potential rivals are nothing more and nothing less than Brazil and Spain. So, although soccer offers surprises, happiness invades each and every one of the Argentines.