Redmond SteakMaster RGM-M805 Review: The REDMOND STEAKMASTER RGM-M16P electric grill has become one of the company’s most anticipated appliances for us. We have previously tested other grills of the brand, and each of them still works flawlessly, even after three years of active use. Initially, we could not understand why something that is already perfect improve? However, the manufacturer has its own opinions on this matter, and we will try to reveal in detail the main advantages and features of the novelty.

As it turned out, there are no global differences in the dimensions and weight of the RGM-M16P and RGM-M805, although the new line visually looks more massive. But the appearance has become more elegant. Instead of mechanical controls, an electronic panel appeared, and only three keys remained in the front: “On / Off”, setting up manual programs and a settings knob. 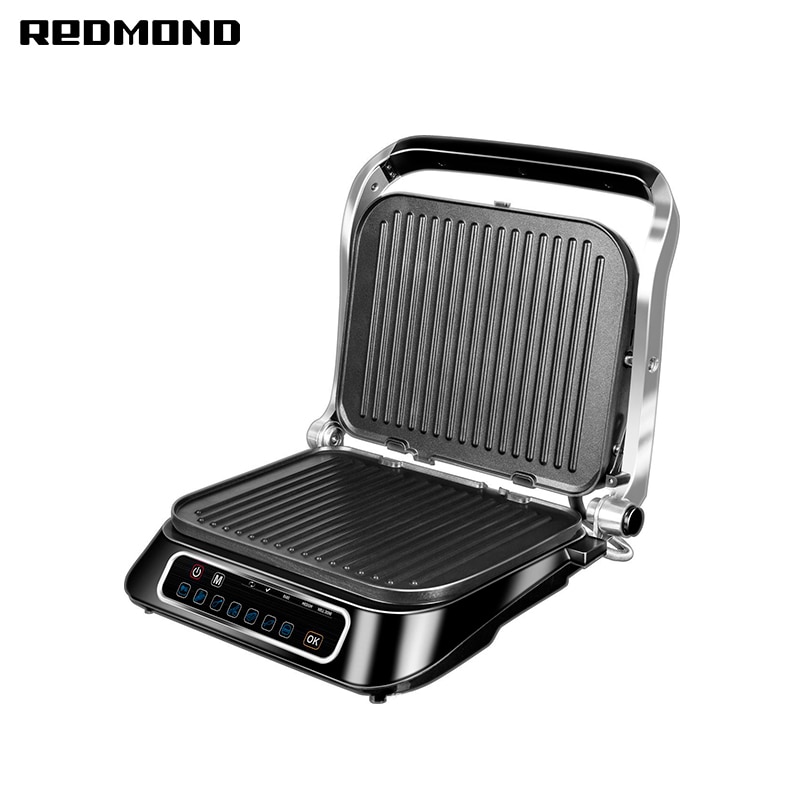 There is a fat tray on the backside. Only the white winding of the wire is a little frustrating because it will darken after a few weeks.

As for aluminium panels with non-stick Teflon coating, they are easy to remove and easy to clean. However, washing them in the dishwasher is prohibited. Also, do not use harsh detergents with abrasive particles.

The 1800-2100 W heater is installed under the panels. The heating element fits snugly, covering the entire working area. 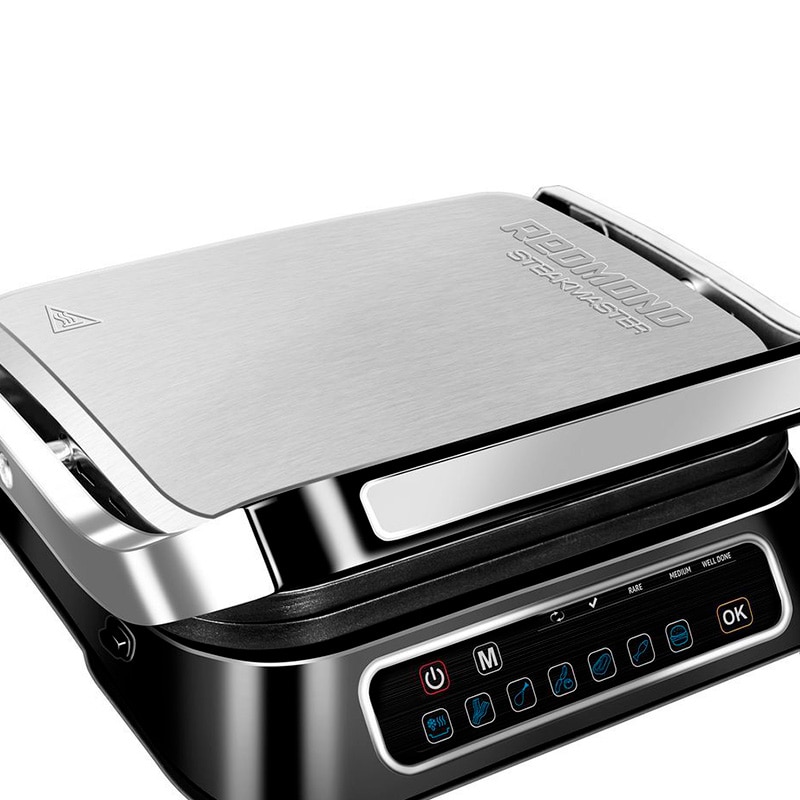 Like the previous model, the device opens 180° for the use of two panels at once. The barbecue mode is useful when cooking vegetables and products that do not require strong roasting.

The package includes the electric grill itself, two removable panels, a recipe book and a baking sheet.

As mentioned above, the new REDMOND RGM-M16P grill uses electronic control, which is carried out using a large and bright display. However, you should note that you cannot select automatic programs while the grill is open. In this position, only manual tuning mode is available. 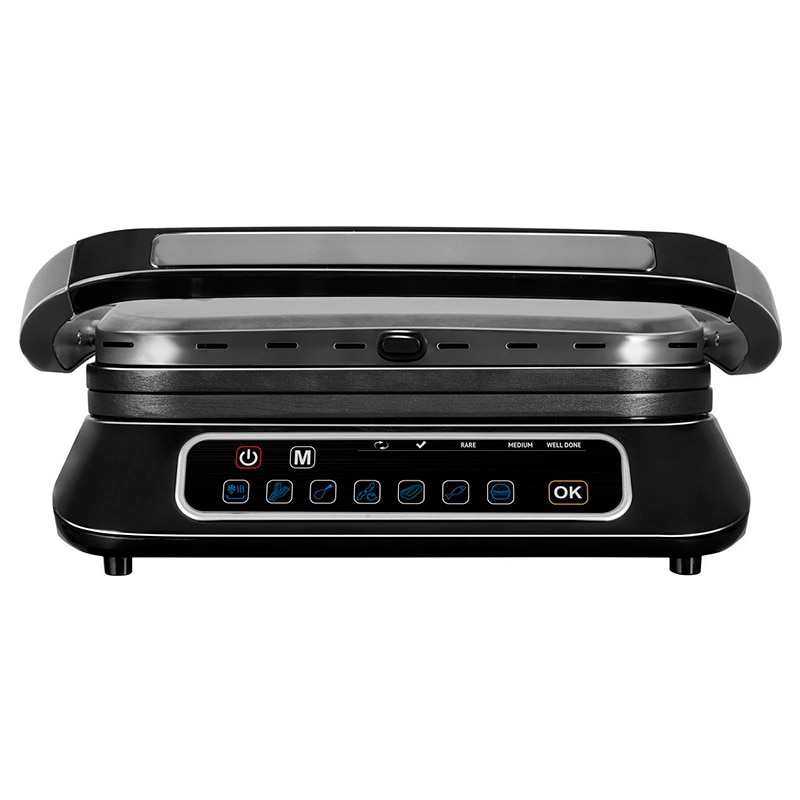 A total of 7 useful programs are at your disposal, including the following:

With a manual setting, you can activate the timer for up to 88 minutes with heating power up to 230°C in steps of 10°C. 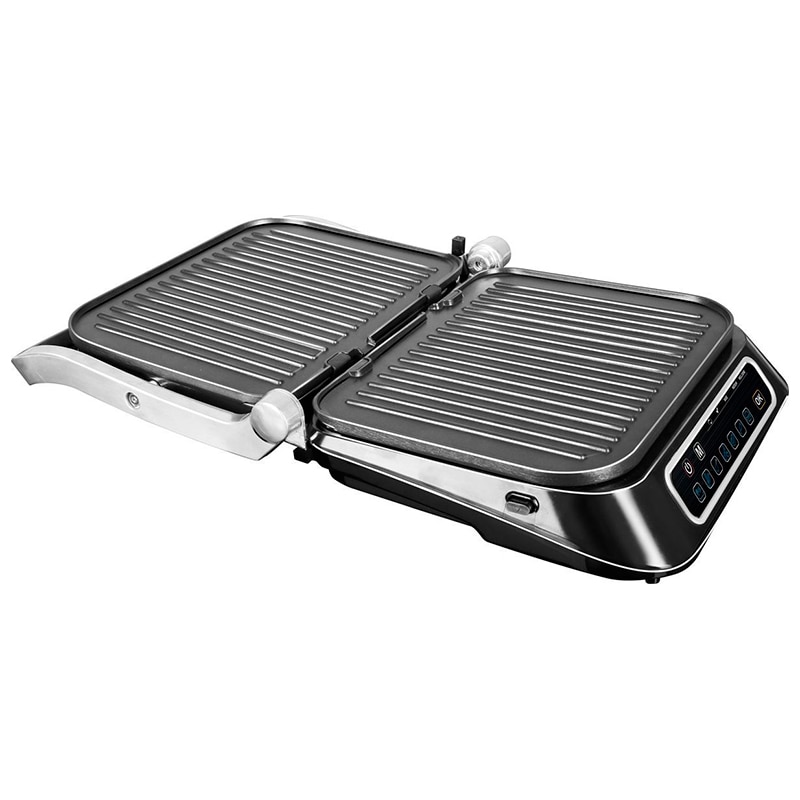 Also, on the display, there is a scale of heating and readiness for work. It is possible to change the intensity of roasting (weak, medium and strong). In automatic mode, the system independently determines the thickness of the meat and shows the type of frying.

The new electric grill enumerates the virtues of previous generations, but uses more convenient electronic controls and a flexible manual mode. The weaknesses of the model can only be attributed to the need to close the lid to select modes. In general, the steaks come out juicy and fragrant, and it is very convenient to follow the cooking process. All juice and fat accumulates in the pan, and those particles that remain on the panels can be removed with a napkin.